Universal Control and Sidecar in macOS: Which desktop extender should you use?

What is Universal Control?

Universal Control allows you to use the keyboard and mouse or trackpad on one Mac to control another Mac and/or an iPad. The additional devices are not used as external displays for the control Mac. The devices still operate separately, but with Universal Control, you can jump between them as if they were one device.

With Universal Control between a Mac and iPad, when you move the cursor to the iPad with your mouse, a circular cursor appears on the screen so you can navigate the iPad interface as if you were using a Magic Keyboard. You can click to launch and use apps, and use the Mac's keyboard for typing and keyboatf shortcuts.

In this animation of Universal Control, the iPad is sitting to the left of a Mac's screen. When setting up, a bar appears on the iPad screen when you first move the cursor from the Mac to the iPad. Continue moving towards the center of the iPad to complete the connection. The bar won't appear again.

With Universal Control between two Macs, you can control both machines using the same keyboard and mouse. You can even connect a Mac and an iPad to the main Mac at the same time for a total of three connected platforms, all using the same input devices.

When dragging a file from a Mac to an iPad, the file must be dropped on to an open app.

If you want to transfer files between two Macs or from an iPad to a Mac, you can drag and drop the file anywhere, including the Desktop.

What devices can use Universal Control? 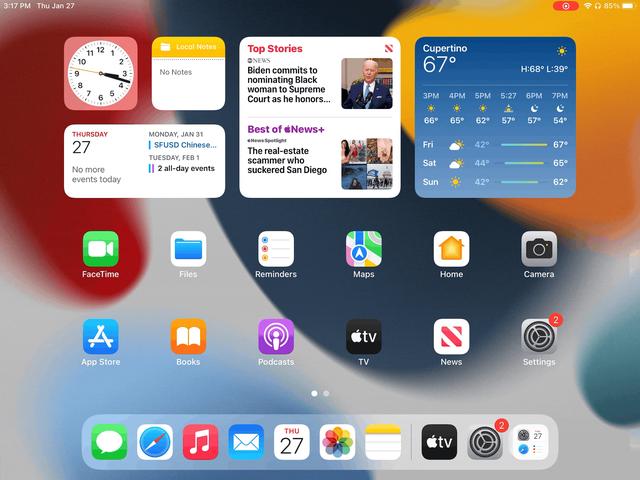 How do you set up Universal Control?

Universal Control is turned on by default on Macs running macOS 12.3. To set up an iPad or another Mac to control, go to System Preferences and select Add Display to find your iPad and connect it to your Mac. If you don't see it, make sure Bluetooth, Wi-Fi, and Handoff (SettingsGeneral AirPlayHandoff Handoff) are turned on.

Once the iPad is connected, simply bring your iPad close to the Mac to activate Universal Control. Then, when you move your Mac's cursor near the edge of the Mac's display (either with a file or on its own), a bar will appear on the iPad's screen edge. Keep moving the cursor toward the iPad and it'll jump to the other screen. You can see it in action in the video below.

Sidecar lets you use an iPad as an external display on a Mac. You don't need to use any cables, everything is done wirelessly via AirPlay. Unlike Universal Control, Sidecar does not let you access the connected iPad at all—you can't use any files or apps.

Instead, your Mac's desktop will be mirrored or extended on your iPad so you can use Multi-Touch gestures. You can even use Apple Pencil, so, for example, you can be working in Adobe Photoshop on your Mac, use the iPad as a Photoshop workspace, open a file in that workspace, and then use Apple Pencil to edit the file.

When using Sidecar, the iPad displays a Sidebar to access modifier keys such as Command, Option, and Shift. Sidecar also shows a Touch Bar at the top or bottom of the iPad that displays additional controls just like the physical Touch Bar on older MacBook Pros.

Sidcar can be used to mirror a Mac's display or to extend the desktop.

Just like a full-sized monitor, you can set up the displays so that the iPad display mirrors the first or set up the iPad as a display that extends your Mac's desktop so you can have more windows open and available at a glance. For example, you can have a browser open on the iPad's screen and a Pages document that you're writing on the main Mac screen. The extended desktop is very handy for pro apps like Photoshop, Final Cut Pro, or Logic.

What devices can use Sidecar?

Sidecar requires a compatible Mac using macOS Catalina or later and a compatible iPad using iPadOS 13 or later. Here are the Macs and iPads that can run Sidecar.

How do you set up Sidecar?

Setting up Sidecar takes just two steps, as long as both devices are signed into iCloud with the same Apple ID using two-factor authentication. On your Mac, select the Display arrow in the menu bar or the Screen Mirroring icon in Control Center. In the list, find the iPad you want to use as a secondary monitor and select it. That will connect your iPad to your Mac as a secondary display.

By default, your iPad will extend the desktop of your Mac. If you'd rather mirror your Mac's desktop, return to the Display menu and choose the option to mirror your display. While using the iPad, you can freely use touch gestures or the Apple Pencil to control Mac apps. There are also a few settings on the Mac, including Show Sidebar, Show Touch Bar, and Enable double tap on Apple Pencil

Should you use Universal Control or Sidecar?

Now that you know the difference, you can probably figure out for yourself when to use one over the other. If you're still unsure, consider these scenarios:

If you fit any of those criteria, you're going to want to use Universal Control. While still very new, it's a fantastic feature that could begin to bridge the gap between the Mac and the iPad while also respecting each device's integrity.

However, if you work primarily on a Mac and just want to expand the desktop or use touch gestures, Sidebar is the way to go. The Mac is usually the main production device, and all your software tools are on it. Having an additional display makes it a lot easier to do your work.