For those looking for the best motherboard for a compact Rocket Lake build, we’ll be diving deep here to examine and test three Mini-ITX motherboards based on Intel’s latest mainstream chipset, Z590. We’ll take a close look at the ASRock Z590 Phantom Gaming-ITX/TB4 (~$350), Asus ROG Strix Z590-I Gaming WiFi ($369.99), and the Gigabyte Z590I Aorus Ultra ($321.49). We couldn’t get our hands on the MSI Z590I Unify Gaming ($369.99) in time for this article, but we expect that board to arrive in the coming weeks and post a review when we can.

When you’re shopping for a Mini-ITX motherboard (see more on motherboard form factors here), chances are the case you use is going to be compact as well. This means limited CPU cooling options and, due to the size of the board, fewer Memory and PCIe slots and M.2 sockets. That said, these tiny builds can be portable powerhouses when done right. But you need to have solid power delivery and cooling and pick the right ITX board for your needs, as using an add-in card (beyond the GPU) to supplement any missing ports isn’t possible. We’ll take a detailed look at the three boards we have and see which is the best option overall.

In our testing, all boards performed well, easily mixing in with our other test results, including full-size and more-expensive options. Out of the box, the ASRock board is the most hamstrung by Intel’s power limits, while the other boards tend to run a bit more free in comparison. But all you need to do to get the ASRock up to par with the other boards is to raise its power limits. The performance difference was negligible outside of the long-running tests, where the turbo time/limits come into play. Gaming performance was similar among all the boards, as was memory bandwidth and latency testing. Outside of a couple of outliers, all boards performed similarly, especially when the playing field was leveled by removing the stock limits.

All three of our Mini-ITX boards include two DRAM slots, a single PCIe slot, two M.2 sockets, 2.5 GbE and Wi-Fi. The difference between these boards boils down to appearance, Wi-Fi speeds, audio codec, SATA port count, power delivery capability, rear IO port type/count and price. We’ll dig into the features and other details on each board below, starting with the ASRock Z590 Phantom Gaming-ITX/TB4. Below are the specifications from ASRock.

Along with the motherboard, the ASRock Z590 Phantom Gaming-ITX/TB4 box includes a slim collection of accessories, though there’s enough to get you started. Below is a complete list of all included extras. 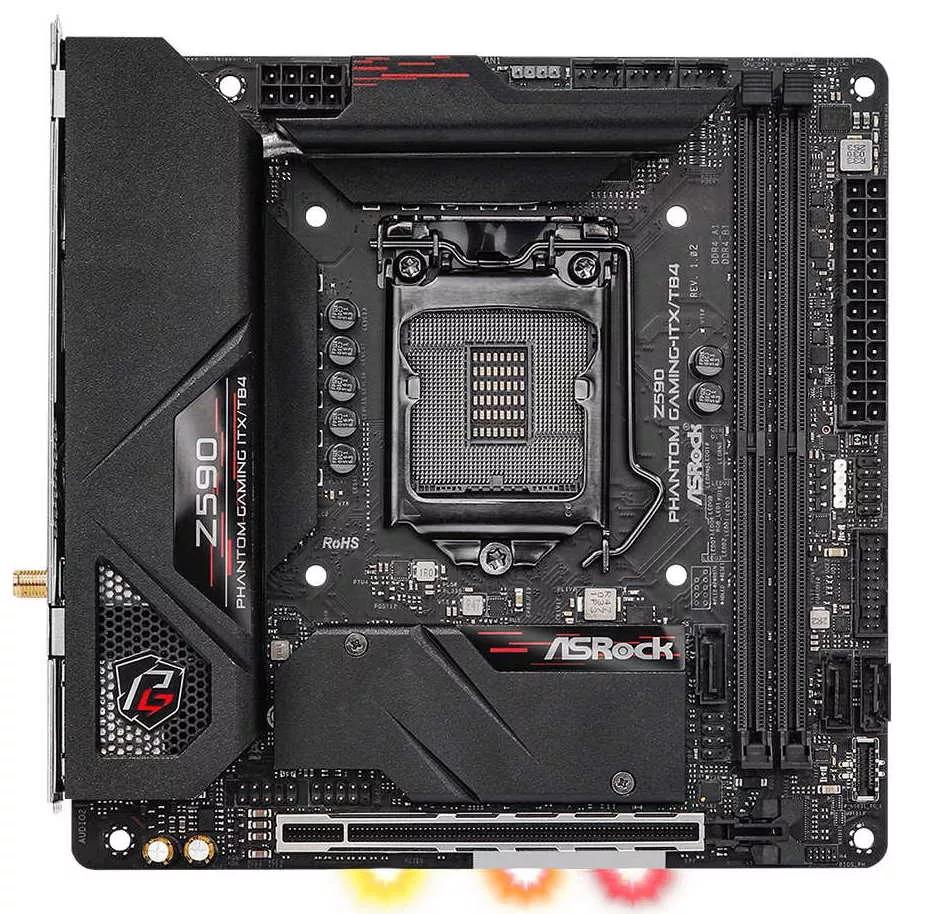 After we took this little guy out of the box, we see a densely packed Mini-ITX board that comes with almost all of the features typically found on a full-size motherboard. The ITX/TB4 sports a matte-black PCB, along with a heatpipe-connected heatsink for the VRM. You can spot the Phantom Gaming theme easily, with branding located above vent holes on the rear IO as well as the chipset/M.2 heatsink, just above the PCIe slot. On the RGB LED front, the Z590 PG-ITX/TB4 has three LEDs on the underside of the board, behind the PCIe slot. ASRock’s Polychrome Sync application controls the lighting. Overall, I like the board’s appearance. It’s is improved over the last generation and won’t have any issues fitting in with most build themes.

Typically when discussing motherboards, they’re split into the top half and bottom half. But since these boards are so small, we’ll work in a clockwise motion starting on the left with the IO cover. Here we see the metal cover hiding all of the rear IO bits, as well as a small fan designed to dissipate heat. The top and the rear IO plate have holes in them to circulate the air from the fan.

Across the top of the motherboard is the 8-pin EPS connector (required) to power the CPU. Just to the right is a 3-pin ARGB header and three 4-pin fan headers. The CPU and Chassis fan headers support 1A/12W, while the CPU_Opt/Water pump connector doubles that to 2A/24W. ASRock states the CPU_OPT/W_Pump header auto-detects if a 3-pin or 4-pin fan is in use. I would like to see all of the fan/pump headers auto-detect what’s attached.

Moving past the VRMs to the right side of the board, there are several headers, ports and slots. Starting with the two unreinforced DRAM slots, support is listed to 64GB with speeds up to 4266+(OC). Surprisingly this is lower than many ATX size boards (typically, these smaller boards offer better RAM clocking capabilities) and lower than the other two boards in this roundup. That said, the ASRock board ran our DDR4 4000 sticks with minimal adjustments (that same VccIO Memory +0.10 for the ASRock board we looked at previously), so for the majority of users, the limit (on paper) won’t be an issue.

On the right edge, from top to bottom, is the 24-pin ATX connector for board power, front panel header and 4-pin RGB header, USB 3.2 Gen 1 header, three SATA ports (supports RAID0, 1, 5 and 10), and a front-panel USB 3.2 Gen 2x2 Type-C header. Above the 24-pin ATX are the debug LEDs that tell you where the board got hung up in the POST process. Since there isn’t any room for the 2-character LED that provides you more detailed information, this is a good value-add for troubleshooting.

On the bottom of the board is the single reinforced (ASRock Steel Slot) PCIe slot with extra anchors, a better latch, and signal stability improvements (according to the company). The slot runs the full PCIe 4.0 x16 bandwidth when using an 11th generation CPU. Located above the slot is a USB 2.0 header and the front-panel audio header.

The bottom-left corner holds the audio bits. Visible are a couple of audio capacitors (in yellow) while the Realtek ALC1220 hides the IO cover. While this is a premium audio chip, it’s last generation’s flagship; I would like to have seen the newest codec used as we see on the Asus. That said, this solution will still be sufficient for most users.

Just above this slot is a dual-purpose heatsink designed to keep the southbridge chip and an M.2 module cool. Simply unscrew the two visible screws and it exposes the PCIe 4.0 x4 (64 Gbps) M.2 socket. The second M.2 socket sits on the back of the board, supports both PCIe and SATA-based modules, and does not have a heatsink on it. Both sockets support 80mm drives. The M.2 sockets support RAID0 and 1. The manual doesn’t list any lane sharing, which makes sense considering the three SATA ports here, when the chipset provides six natively.

ASRock chose an 8-phase configuration for Vcore on this little board. You won’t find any VRM doublers as in this direct setup. Power flows from the 8-pin EPS to a Renesas ISL69269 12-channel (X+Y+Z=12) controller, then on to the 90A ISL99390 Smart Power Stages. The 720A available for the CPU is enough for stock operation and even overclocking our Core i9-11900K processor (with ambient cooling).

Typically we list all of the buttons and headers along the bottom of the board, but due to the Mini-ITX design, we covered this already during the motherboard tour above.

Taking a look at the integrated rear IO plate, we see it sports the same styling found on the Z490 version: primarily a grey-and-black background with some red highlights matching the Phantom Gaming theme. From left to right are the DisplayPort (v1.4) and HDMI (v2.0) ports for use when working off the integrated GRAPHICS in your CPU. Next are four USB 3.2 Gen 1 (5 Gbps) ports and a single USB 3.2 Gen 2 (10 Gbps) port and one ultra-fast Thunderbolt 4 (40 Gbps) Type-C port. In blue is the Killer E3100G LAN port and a small Clear CMOS button. In the middle, we see holes for venting air from the hidden fan (which is inaudible, by the way), the Wi-Fi 6E antenna mounts and the 5-plug + SPDIF audio stack.

The BIOS theme in the Phantom Gaming-ITX/TB4 matches the Z590 PG Velocita we recently reviewed, sporting a black/red theme. As usual, we capture a majority of the BIOS screens to share with you. ASRock includes an Easy Mode for high-level monitoring and adjustments, along with an Advanced section. The BIOS is organized well, with many of the more commonly used functions accessible without drilling down multiple levels to find them. Here you adjust the Memory, Voltage, and CPU details in separate sections, but it’s all on the first page of each section. In the end, the BIOS worked well and was easy to navigate and read.

On the software side, ASRock includes a few utilities that cover overclocking and monitoring (PG-Tuning), audio (Nahimic 3), software for updating drivers and downloading applications (App Shop), and of course, RGB control (Polychrome RGB). We did not run into any issues in our limited use of the applications.

Before we get to the performance for this board and its competitors, we’ll detail the other two models as well. Next up is the Asus ROG Strix Z590-I Gaming WiFi.