It might be worth slumming it out with an AMD APU while waiting for GPU prices to drop: AMD Ryzen 5600G, 5700G review

Halloa, hapless #PCGamer. It's been a while since your latest GPU update, hasn't it? If you're lucky you're still rocking a GTX970 or RX580 from nearly a decade ago, and if, like many gamers, you were unfortunate enough to time your update or new PC build to the start of the chip shortage, all you're left playing with is a glorified calculator.

Now I can't help you magic a GPU from thin air — I'm sitting pretty with an RTX 2070 Super so couldn't care less for your plight (muahaha 😈) — but what I can tell you is whether it's worth slumming it out with an AMD APU (the 5600G or 5700G) while holding out for GPU prices to drop.

What I'm looking to answer, primarily, are the following questions:

At my request, AMD very kindly sent over their 5600G and 5700G APUs, as well as an RX 6600 GPU from Gigabyte as a reference card. The rest of the config is as follows:

Both CPUs differ from their 5600x and 5800x counterparts in that they're not overclockable, only support PCIe Gen 3, and the 5800x boasts of a much higher 105 W TDP. The x variants also run faster by default. Lastly, the two x CPUs boast of double the L3 cache at 32 MB, which significantly speeds up certain workloads like code compile.

For enthusiasts who love tinkering with their PCs, a locked CPU is limiting. My 5800x, for example, gives me about 15% more performance than a stock 5800x because I could overclock it.

The other issue here is PCIe Gen 3 support. PCIe is a high-speed interface used to connect data-hungry peripherals to your system. Primarily, these are solid-state storage (SSDs) and graphics cards (GPUs). Modern CPUs now support PCIe Gen 4 — as do high-end SSDs and GPUs — which offers twice the bandwidth that PCIe Gen 3 does.

This is, again, only a problem for enthusiasts or professionals looking to build a cutting edge system with 5,000 MBps NVMe drives and RTX 3090-class GPUs. As you'll see from my testing, PCIe Gen 3 isn't a limitation for either gaming or most regular workloads.

Lastly, it bears mentioning that the integrated Vega graphics in the 5600G and 5700G do not support any form of ray-tracing or path-tracing tech. They also have no VRAM to speak of and thus cannot handle demanding games.

The difference in gaming performance between the RX6600 GPU running on the 5800x, 5600G and 5700G was negligible in GPU-bound tests.

Tests that are more dependant on CPU clock speeds — games like Counter Strike: Global Offensive and F1 2019 — show a ~15% performance advantage on the 5800x. These are almost entirely a result of the 5800x boasting of higher clock speeds.

Performance with a dedicated GPU like the RX6600 is quite similar regardless of CPU or APU. CPU-bound titles do perform better with the 5800x, but when you're already getting well over 150 FPS, it doesn't matter too much. (Higher is better)

We're still talking frame-rates in the 230+ FPS range, though, so for most people, the performance improvement is academic at best.

The only test where bandwidth proved to be a bottleneck was in 3D rendering, and that too only in the demanding Victor benchmark for Blender. Victor is a large scene that usually takes well over 20 minutes to render. Smaller renders like the venerable BMW27 test finished within seconds of each other. 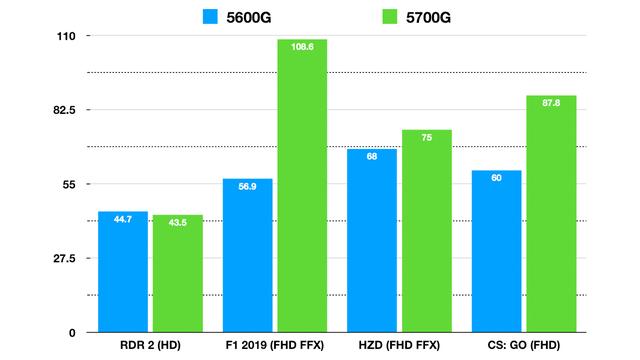 Using OpenCL, it's clear that the RX6600 isn't bottlenecked by PCIe 3.0 in most situations. It's only in heavier, data-hungry renders that the bandwidth proves to be limiting. (Lower is better)

When rendering the Victor scene using OpenCL, which uses the GPU, the 5800x and RX 6600 combo was around 40% faster (24 min vs 34+ minutes) than both the 5600G and 5700G when paired with the same GPU. If you're a professional working with heavy, GPU-intensive files, avoid AMD's APU duo.

#2: The 5700G is significantly faster in light games, but not in GPU-heavy games

In games like Horizon: Zero Dawn and Red Dead Redemption 2, both GPUs performed similarly. The 5700G's GPU had a slight edge, but it wasn't significant enough to be worth considering. In most cases, the difference in performance between the two is a couple of FPS.

These games require a lot of GPU VRAM, which the APUs don't have, and is likely the reason that there's no significant difference in performance between the two chips.

The 5700G's onboard GPU beats the 5600G in light games, but performs at par in more demanding titles. (Higher is better)

In CS: GO and F1 2019, games that don't require a tonne of VRAM, the 5700G storms ahead, offering nearly double the performance at 1080p. The performance delta drops off as you push resolutions higher, but with the 5700G, you can still expect 60 FPS in CS: GO at 2K. By the time you hit 4K, there's no significant difference in performance between the two chips.

#3: For regular home/office use, it doesn't matter what you buy

In both cases, the two extra CPU cores and the one extra GPU core of the 5700G made a negligible impression (~5%). Even the 5800x with its much faster CPU and dedicated GPU had no significant impact on day-to-day workloads.

If you're a professional who relies on CPU performance and needs a GPU but can't afford one, I'd still recommend getting the CPU you need — a 5800x or comparable Intel model that also includes an integrated GPU — and buying the cheapest GPU you can buy to run your monitor. The GPU in the APUs is going to be of no benefit at all for video encoding or 3D rendering, and you'll be sacrificing too much CPU performance in the long term.

If you're a desperate gamer, get the 5700G. It offers enough of a performance bump over the 5600G in light games to justify getting one, and you can at least enjoy 60+ FPS in less demanding games like Valorant, CS: GO, or DOTA 2. When you do buy a real GPU, the 5700G will not hold it back.

If, like me, you don't play CS: GO and the like, then just get the 5600G and put the money you've saved into your GPU budget to get it that much sooner. The 5600G's GPU will give the same performance as the 5700G in demanding AAA games like Red Dead Redemption 2 and God of War, and when you get a GPU, it will not be a significant bottleneck.

For home/office use, just save your money and get an Intel i3 with integrated graphics.

Note: The only reason Intel Alder Lake CPUs with their Xe graphics chips aren't included in this test is because we couldn't get our hands on review units in time for this article. If you'd like a Vega vs Xe graphics comparison, do let us know and we'll try to arrange it.