Front and centre is the 34-inch ultrawide OLED panel, enhanced by quantum dot technology for even more vibrant colours. OLED tech has two obvious advantages over the LCD panels used in almost all gaming monitors to date.

First, OLED screens are much faster, as that 0.1ms response implies. That makes it at least five times faster than the best LCD monitors, on paper. In practice, the gap is even bigger. An OLED pixel can go from completely off to fully on in around 0.1ms, whereas an LCD pixel takes five times longer to complete just part of that transition, and more like 10 to 20 times longer to complete it. There is no comparison.

OLED panels also have full per-pixel lighting. Each pixel is its own light source and can be switched off entirely, in effect delivering perfect black levels and infinite contrast. By comparison, LCD monitors muck about with various forms of local dimming to compensate for light bleeding through pixels that are supposed to be switched off. That’s never going to be as good.

Anyway, Alienware rates this monitor at 1,000 nits peak brightness, which is very impressive for an OLED panel, though as we’ll see, it’s a slightly misleading claim. Other than the OLED panel tech, other highlights include Nvidia G-Sync Ultimate (and thus an easily earmarking it as one of the best G-Sync monitors of this year too), impressive colour accuracy with 99.3 percent coverage of the demanding DCI-P3 digital cinema space, 175Hz refresh, and three-year cover for the risk of OLED burn-in, which is reassuring.

As for connectivity, two HDMI ports and a DisplayPort socket are provided. However, the HDMI interfaces are limited to 100Hz refresh, which is part of the reason why this screen isn’t a great choice for a PS5 monitor or Xbox Series X monitor. The Sony PS5, in particular, also doesn’t support the 21:9 aspect ratio.

The new Alienware 34 AW3423DW is a tricky display to assess. First impressions on the Windows desktop underwhelm. For starters, the pixel density from the 3,440 by 1,400 native combined with the 34-inch proportions isn’t impressive. What’s more, in SDR mode, the panel looks a bit dull, even at maximum brightness. 1,000 nits? Not even close.

Unlike a lot of so-called HDR monitors based on LCD tech, this OLED monitor needs HDR enabled to strut its stuff, even with SDR content. Two HDR modes are included, HDR 400 True Black and HDR Peak 1000. The latter allows for higher peak brightness in small areas of the panel when displaying HDR content, but actually looks less punchy most of the time. 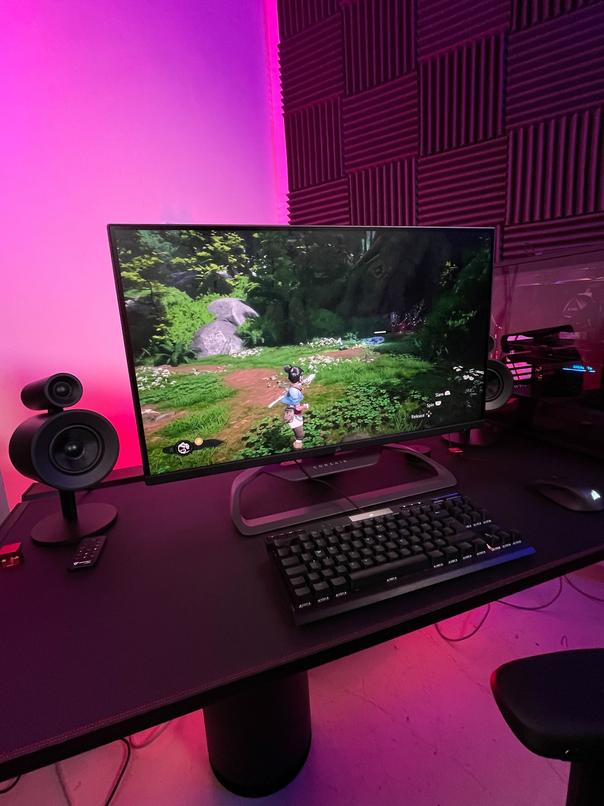 In game, it’s just as impressive. Everything stays so clear and sharp, no matter how quickly you rip your mouse across the mat. Then there are the colours. And the contrast. Suddenly, just about every LCD monitor we’ve ever seen looks a bit watery and translucent, as if you’re viewing everything through a filter. This OLED panel really does deliver incredible depth, stability, and clarity of in-game image thanks to that per-pixel lighting.

Take CyberPunk 2077. We’ve never seen it looking so fabulous in HDR mode. With many supposedly HDR-capable LCD monitors, it actually looks better in SDR mode. Not here. Whether it’s searing shafts of sunlight in outdoor scenes or the contrast between inky blacks and neon lights in moody indoor bar settings, the impact is spectacular.

Deathloop looks outstanding, too. The colours pop, the contrast really draws you in and the incredible response keeps everything looking so crisp. Speaking of speed, even Call of Duty: Warzone looks fabulous, and that’s not something we’d normally say. There’s almost no softening of the image no matter how fast you whip the camera around to the next target.

For context, all this doesn’t suddenly mean that a really fast LCD monitor is awful. Indeed, when it comes to latency, an LCD panel with a much higher refresh will be superior. Latency tends to be a weak point for OLED technology and though we didn’t sense any subjective lag, if online competitive shooters are your thing, this panel won’t be ideal. But once you’ve seen what this Alienware can do in terms of contrast and HDR performance, it’s awfully hard to forget.

For the record, SDR content looks fabulous in HDR 400 mode, too, provided you bump up the SDR brightness setting in the Windows Display Settings Menu. In fact, that’s how SDR content looks best, so once you have the AW3423DW setup up properly, you’re done. You don’t need to switch modes for SDR and HDR content.

If you’re worried about OLED burn-in, look closely at the AW3423DW’s panel and you’ll see that it’s over-provisioned with pixels to the tune of about 20 on both axis. This allows Alienware to shift the image every so often to reduce the risk. It’s a bit like wear levelling in an SSD. That said, only time will tell how well it all holds up.

As for other OLED quirks, we sense the general panel brightness varies slightly according to what is on the screen. This is an ABL (Automatic Brightness Limiter) system doing its thing to control overall power consumption and protect the panel. It’s fairly subtle but worth noting.

Overall - should you buy it?

Gaming monitors will never be quite the same again. The Alienware 34 AW3423DW sets new standards for contrast, HDR performance, and response thanks to its OLED panel. We’ve been waiting an awfully long time for OLED to arrive in a gaming monitor, and it hasn’t disappointed.

That said, this monitor isn’t an all-round triumph. At this price point, there are far better screens for multi-purpose computing. The relatively low resolution and pixel density ensure that, as does the lack of USB-C connectivity. If you demand the very last word in low latency, this probably isn’t the best choice, either. But for most types of gaming and provided that no long-term quirks and issues arise, including burn-in problems, this is surely as good as it gets. Here’s hoping this is just the first step towards a brave new age of OLED gaming for the PC.

To round out your gaming screen research, be sure to check out the best 4K monitors for gaming, the best 120Hz 4K TVs, and the best gaming TVs to ensure you're across all your options.